Nidhi is a data analyst at an online clothing resale startup. She's Indian and grew up in Japan.

Justin is a designer at a self driving car startup. He's white American and also grew up in Japan.

They are high school sweethearts and live in Silicon Valley.

Justin: In some ways our cultural backgrounds are the same – we both grew up in Japan, we went to the same international school from elementary through high school – but in other ways we grew up totally differently.

Nidhi: There wasn’t a dominant culture at our school, which was the main context that we shared. Western-American culture and Japanese culture probably had equal footing, but Indian culture wasn’t there at all…

Nidhi: But even though there were only two other Indian families at our school in the beginning, my family was part of a thriving Malayalee community in Tokyo. Like there’s a Malayalee festival in the fall called Onam, and every year we’d rent out a big hall to feast on a traditional meal and put on a big show. In the summers leading up to Onam our families would get together every weekend to work on our performances.

So my family culture was primarily Indian, specifically Malayalee, with a strong Japanese influence. I mean, I still know Indian actors, actresses, and movies better than I do American. 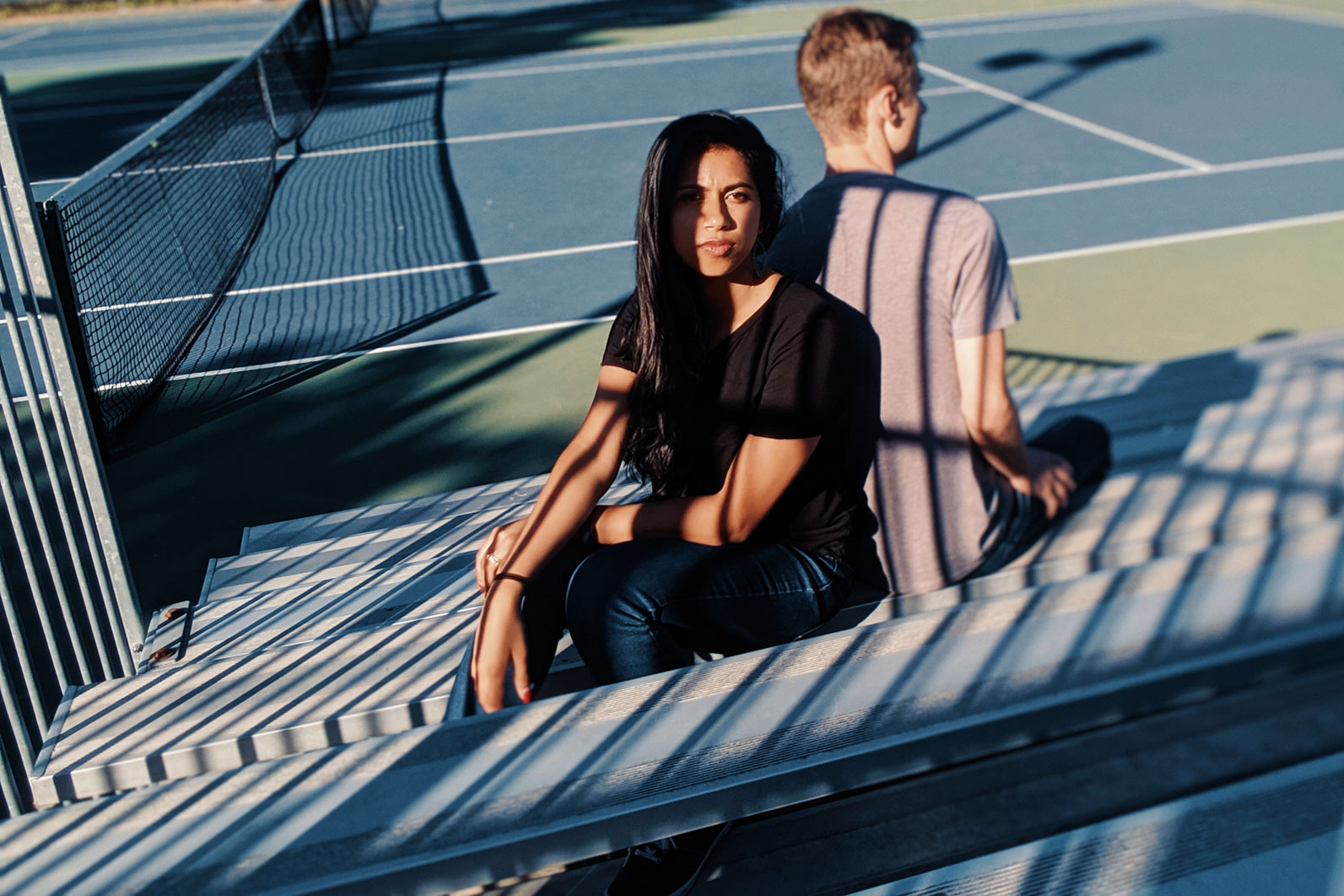 Justin: At the time I had no idea how different our home experiences were because we only interacted in our Western-American school culture. So your home life was juxtaposed with your school life in a way that it wasn’t for me – what was that like for you?

Nidhi: I was never ashamed of being Indian, but I knew it was a part of me that other people didn't understand or weren’t exposed to. I remember in middle school if my friends came over and my parents were watching an Indian movie or listening to Indian music I was a little uncomfortable – would they think it was weird? I mean a lot of that was just normal teenage anxiety about being different.

My friend Grace was a big part of me getting over that. She saw a Bollywood movie on a plane once and seemed open to learning more. She even came to Onam one year and watched me perform, which was really special. By the end of high school I realized that non-Indians could appreciate Indian culture and even watched a Bollywood movie with my best friends at a sleepover.

Our school faculty also celebrated diversity so that helped too. Overall my school experience was very positive.

Justin: School was a positive experience for me as well, but there was also a very clear social hierarchy: being half Japanese and half western was the ideal.

Nidhi: That was the standard.

Justin: Next was Japanese, or Japanese speaking. And then at the very bottom was anyone who couldn’t speak Japanese, especially if you were white.

Nidhi: I think we both did a pretty good job of being somewhere in the middle.

Justin: But that hierarchy really made me not want to be a white-American. In middle school I wanted to dye my hair black because of the beauty standard. And I was always in this constant state of wondering how to fit in or being scared of doing the wrong thing.

Nidhi: Japanese culture is very...they have a saying that “the nail that sticks out gets hammered down.”

Nidhi: But when we moved to the US for college, we were both suddenly in the majority. I mean my mind was blown at Georgia Tech – it was the most Indians I'd ever seen in my entire life outside of India.

Nidhi: And it was really fun! For the first time I was surrounded by people who understood exactly what it was like to be part of the Indian diaspora. At the very beginning of college, all my friends were Indian.

Justin: I remember! I was so confused!

Justin: I got there and thought, why are all of your friends Indian? But it wasn’t that way back at our school in Japan because it couldn't have been that way.

I also got the sense that white people didn't know what to do with me, but I had never experienced that before. Two of my closest friends from school in Japan were white. Like, my boyfriend was white!

So I actually started to weave in the fact that I had a white boyfriend as early as possible when I was talking to a white person, because I felt like that made it easier for them to accept me.

Justin: That’s funny because even today, if I'm talking to someone who's not a white American, I’ll throw out that I'm from Japan right away. Similar to when you said “my boyfriend is white,” I’m signaling that I’m aware of certain things.

For me, the first part of transitioning into college in America was understanding that being white wasn’t a bad thing. Like it was ok that I wasn’t Japanese. That was the first time in my life that I started being comfortable in my own skin and didn’t need to feel like I had to be less of something or more of something.

But it was also really weird going from being the minority in Japan to being the “default” in America. I was walking into social situations where the power dynamic was completely flipped from what I was used to – and it took me awhile to realize the role of my privilege and what to do about it. 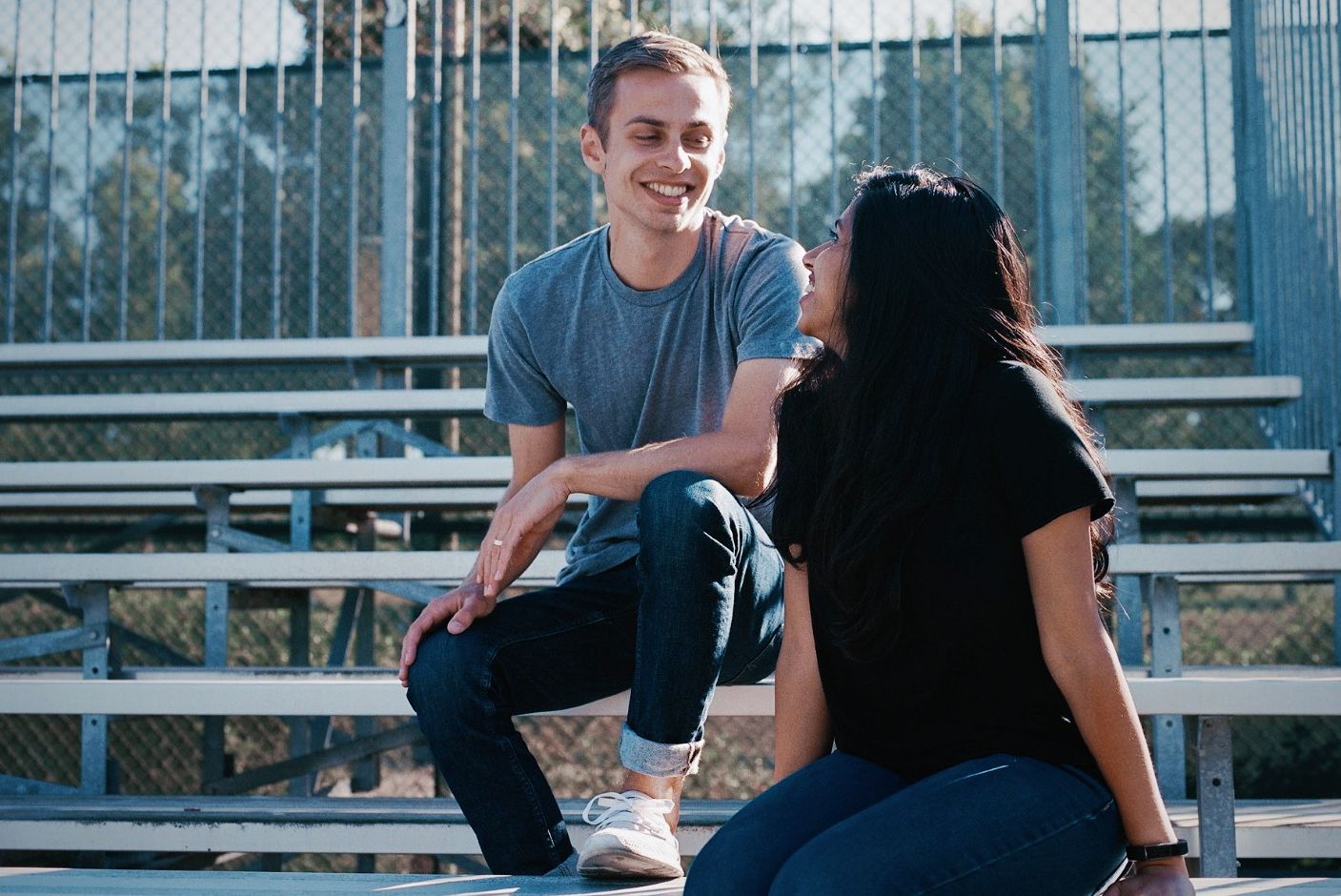 Nidhi: Our transition into college was also the first time that we realized we were different.

Justin: Oh man. Up until then we’d assumed that we were the same because we had co-existed in the same microculture.

Nidhi: When we started dating in high school in Japan, you didn't really have a chance to see the Indian side of me, so you couldn’t have understood what being an Indian immigrant meant. But in college you got to see more and more of who I was.

Justin: It was in bits and pieces. I felt like I was walking through a house with all the lights off and I was slowly going through each room turning the lights on; gaining a better understanding of who you were. College was when we started watching Indian movies together and I went to Indian shows for the first time –

Nidhi: You had no idea what the jokes or references were about while everyone else would be cracking up.

Justin: I had plenty of experience being the only white person among Japanese people in Japan or black people in Atlanta – so it wasn’t strange being a minority – but I was just so surprised that there was this whole part of you that I didn’t know anything about. I mean it was a big adjustment period.

Nidhi: Yeah, and you weren’t thinking about this explicitly back then. It was more of a gradual thing.

Justin: Like when we started dating in high school it had to be in secret. I didn’t understand that at all. But then in college we watched Meet the Patels and I was shocked – here was this 30 year old man who was dating a white girl in secret.

Nidhi: It turns out that literally every brown girl and boy in the US has dated someone in secret.

Justin: That put so many things into context that I had been struggling to understand, especially about your family. 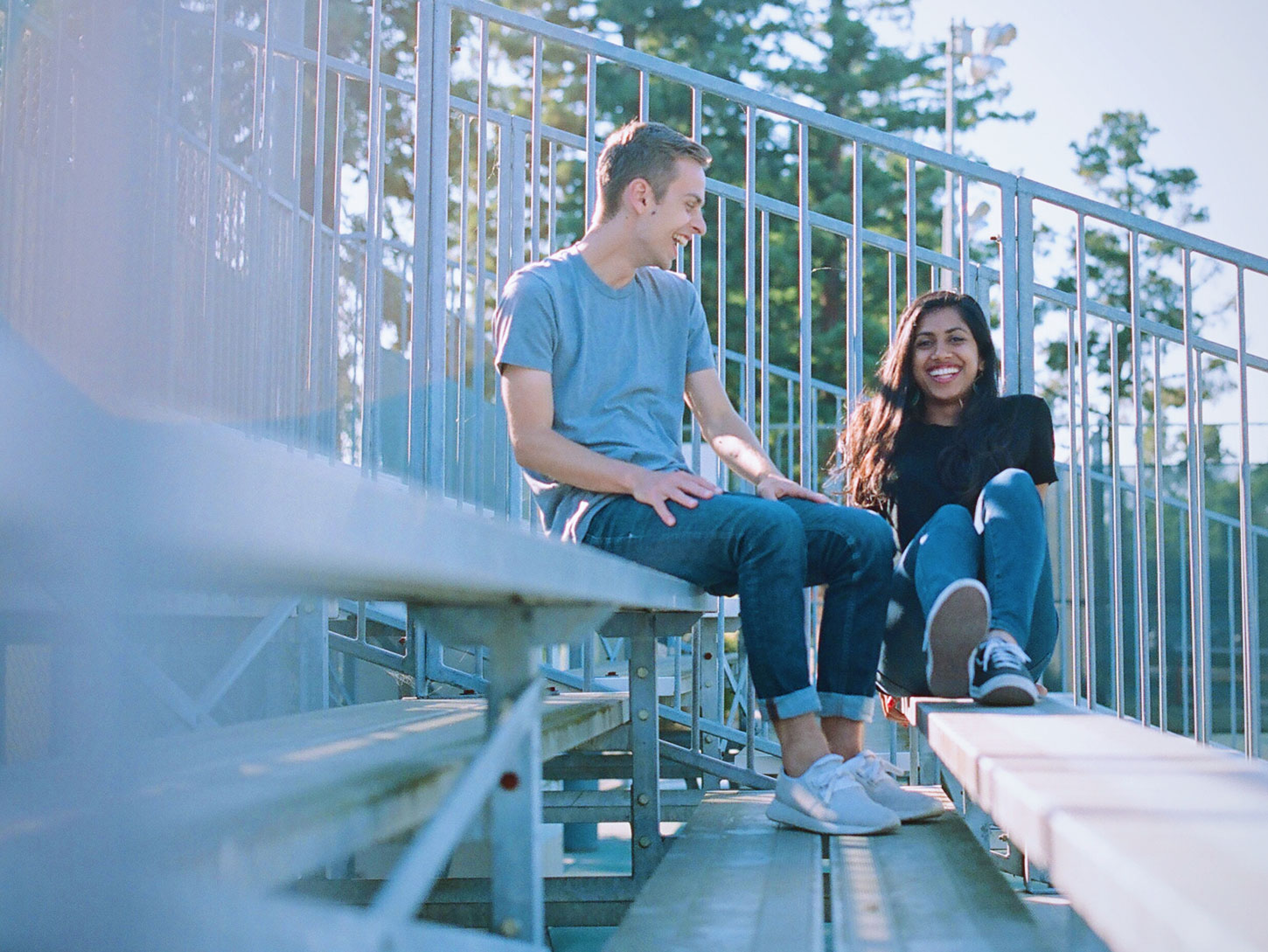 Nidhi: Now that we’re married, one of the super fun parts of being in a multi-ethnic relationship is how we both get access to spaces we wouldn't have otherwise.

Justin: Definitely. Whenever I walk into a non-white environment with you, I can sense that having you there with me eases the apprehension others feel because of my presence.

Nidhi: Maybe this is too blunt, but I feel like it eases people’s worry that you’re ignorant.

Nidhi: Even though it’s hard, our relationship has given me the opportunity to have difficult conversations about diversity and racism with people that wouldn't be exposed to it otherwise.

And I think having a white husband softens my approach because people are less likely to stereotype me as “just another person of color who hates white people.” And I can lean on you to say things to white people that might come off harsher if it came from me.

Justin: Before you moved out here, my roommate and one of my best friends was black, my coworkers were all Asian, so –

Nidhi: Holistically your experience was diverse –

Justin: But the friend group you came into, my church community, was all white. We had talked a lot about that before, but entering into it was completely different.

Nidhi: For most of my life my friend group has been very international and diverse. But after we got married and I moved out to California without a job for the first four months, my social circle of church was pretty much all white. Which was weird and really hard.

Justin: Yeah, in white-American contexts I don’t think people understand the full picture of who you are. Like after Trump’s inauguration, we had a six month stretch where that was all we talked about at home. It dominated our conversations for hours every night.

And it was really hard for you to be in contexts that were all white. I don’t think white people realize or understand that. 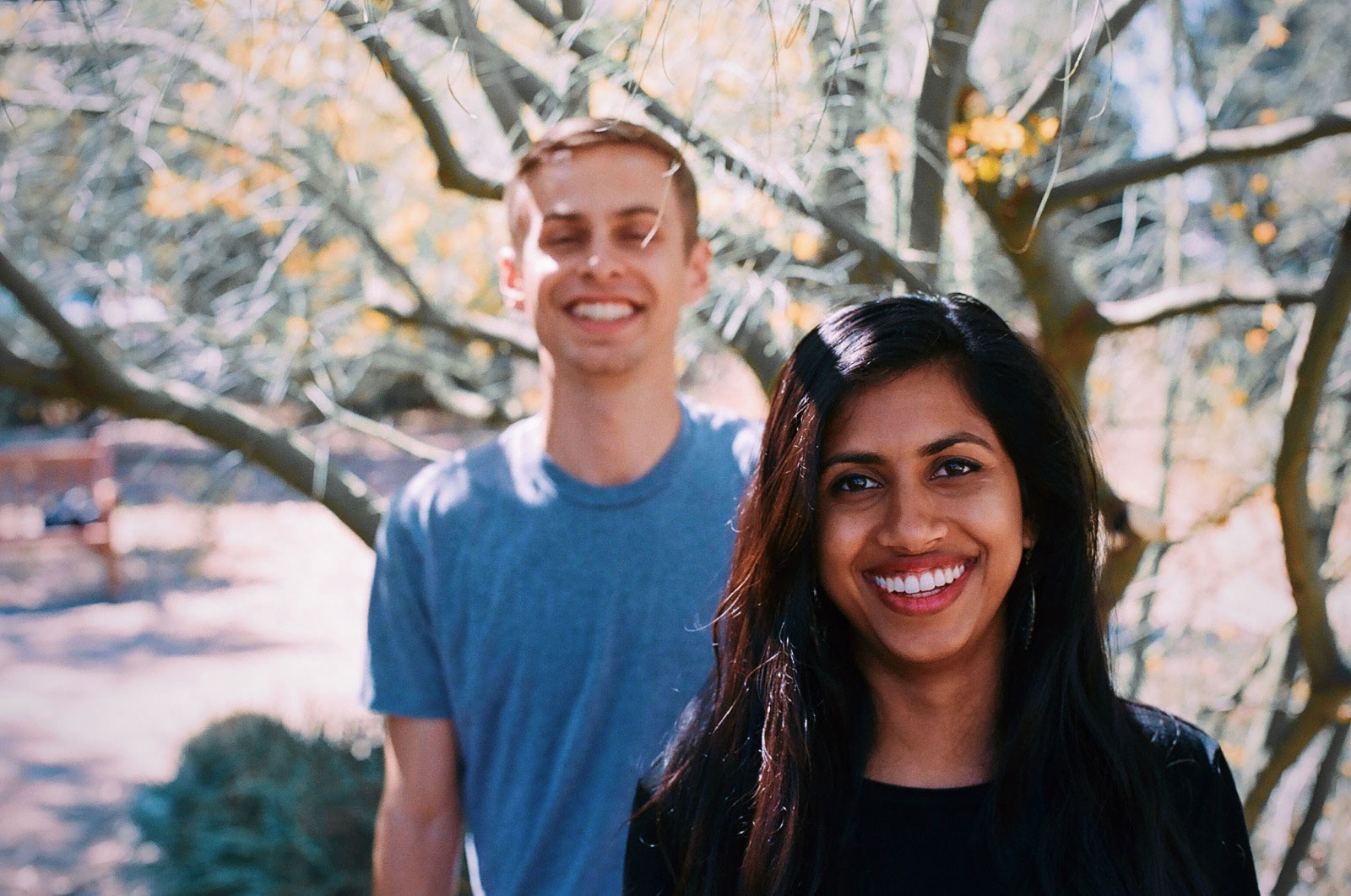 Nidhi: The hard part of being married to a white person is that sometimes I get whitewashed.

In college, that was something I tried to use to my advantage – affiliating myself with whiteness by mentioning my boyfriend to make white people feel more comfortable.

But in the context of being married, it was something I started to get frustrated by. Because people forget I’m not white. I felt like I had to constantly remind people at our church. That’s one of the reasons I kept talking about immigration issues or my green card process. I feel like I had to remind people of those things so that they would see me for who I am.

Justin: Another challenging part is that there are some things about your experience I’ll never understand or have to go through. Like that one time at LAX when the TSA machine went off on my crotch for some reason.

Justin: Obviously I wasn’t excited that the TSA guy was going to grab my junk and I let my frustration show. After I walked through you made a comment like, “I can't believe you gave him so much attitude!” But it was something I didn’t even think about.

Justin: Well even so, because I’m living in a place where I’m the default, I could still be growing more and more blind instead of more and more aware.

Nidhi: That’s true. For me, that applies to both gender and race. It’s funny that I got married so young because marriage itself was never something I idolized. If we hadn’t been together I don’t know when I would’ve gotten married.

So at this specific time in the US, if I wasn’t married to a white man I could’ve easily fallen into the trap of completely distrusting both men and white people. But that’s the wrong side to swing to as well, even though it can be tempting.

Justin: It’s funny to think that without each other, we’d naturally swing to opposite sides of the spectrum. But we bring each other back to the middle. 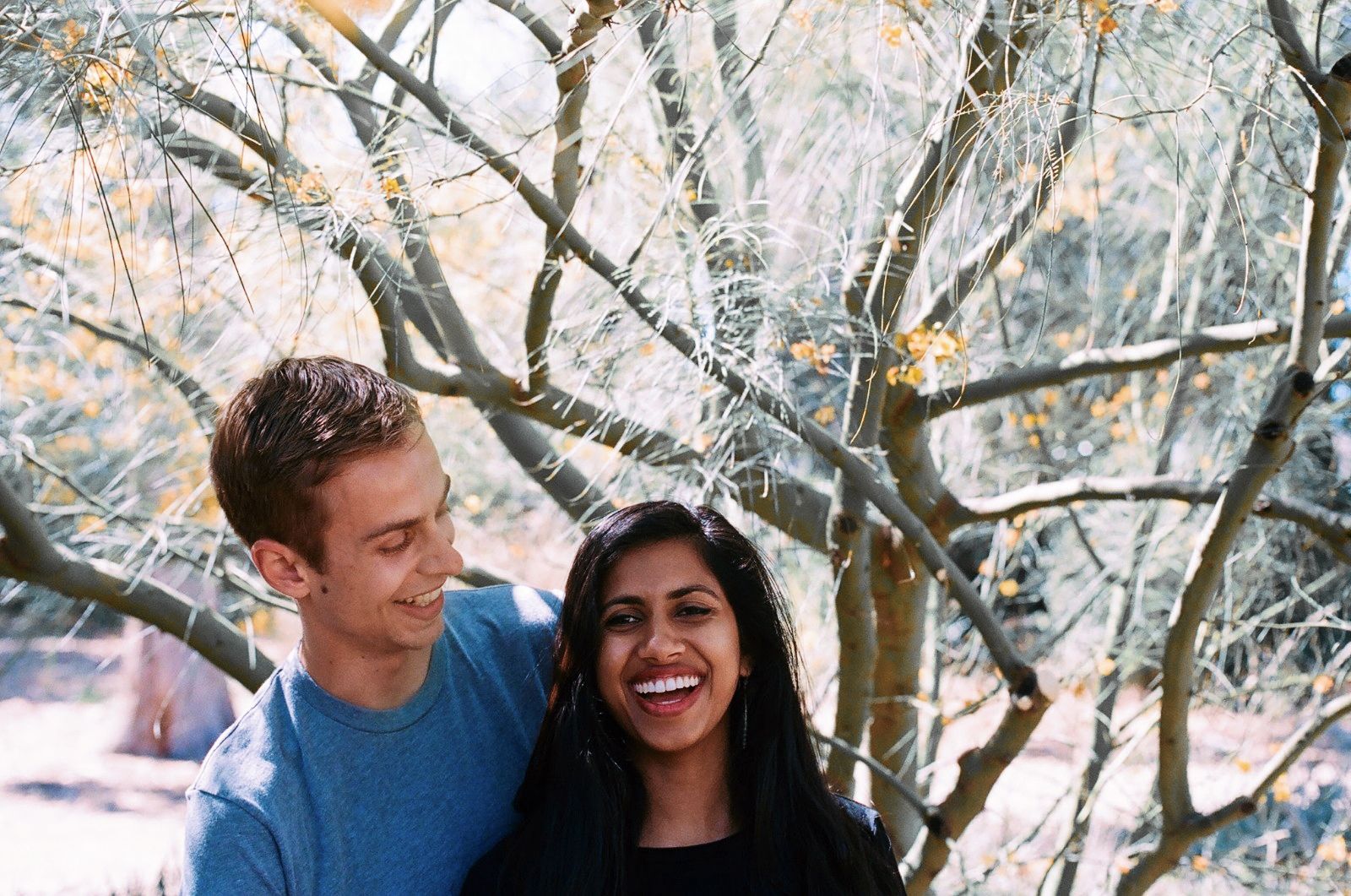 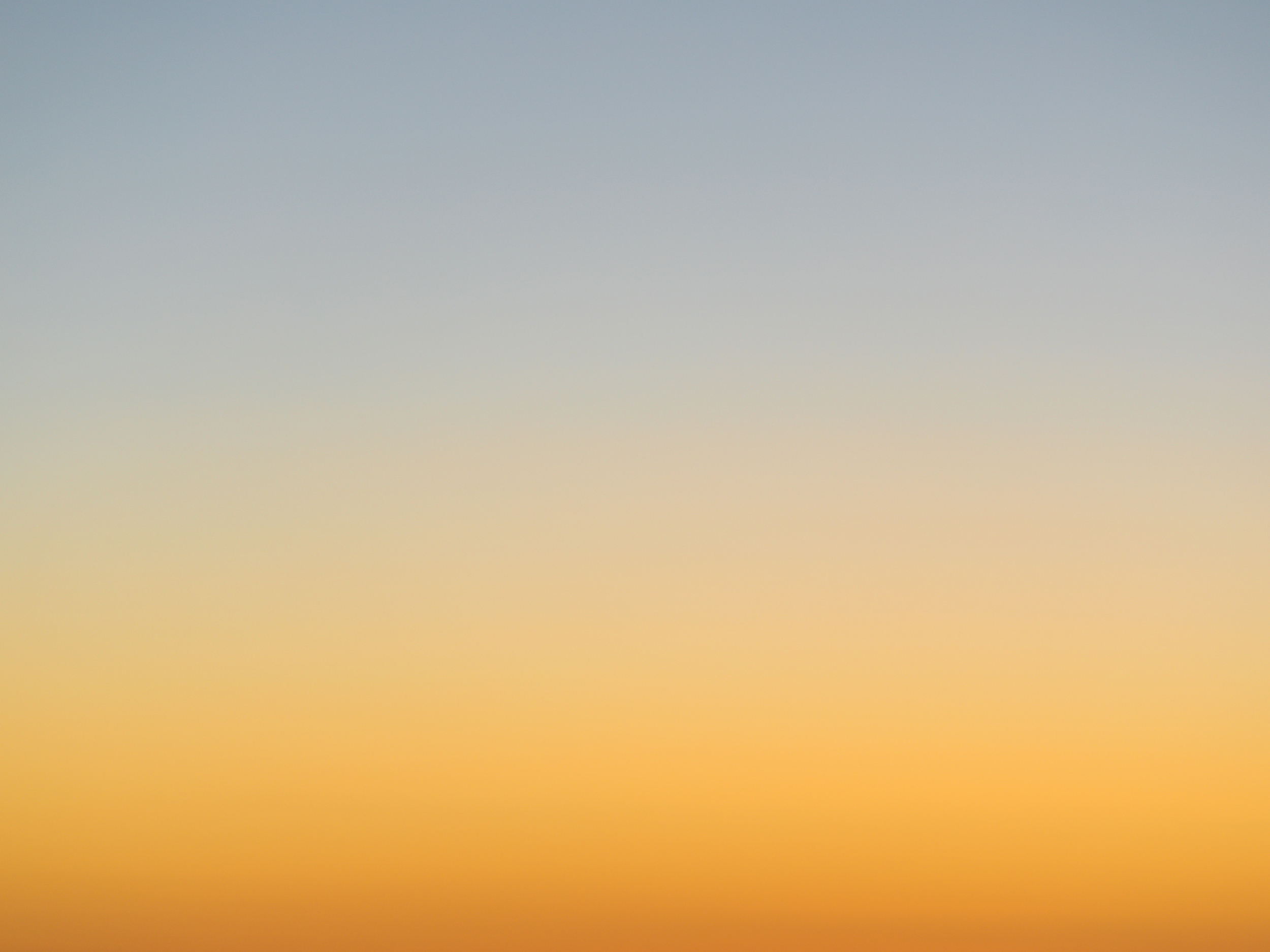 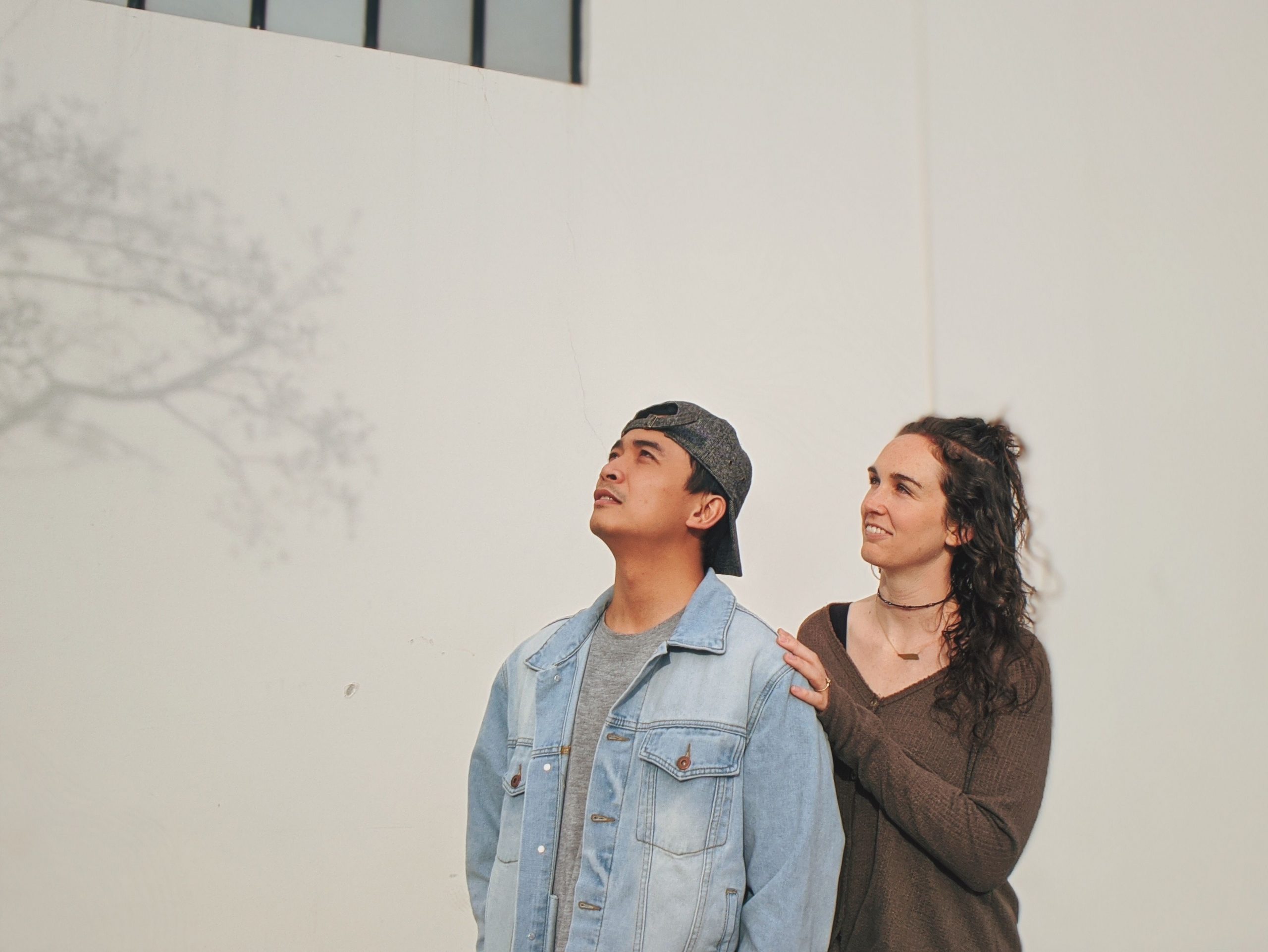 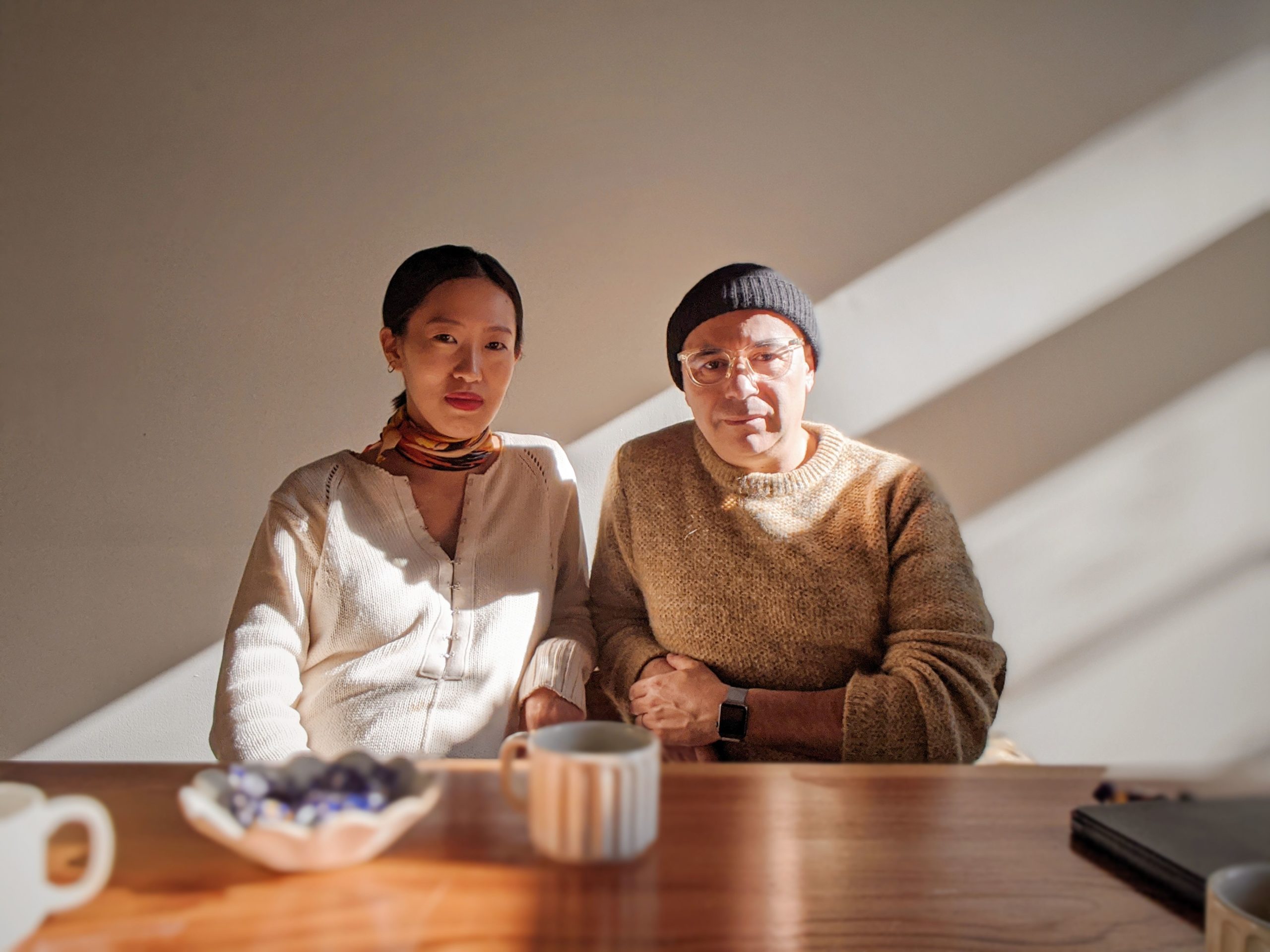 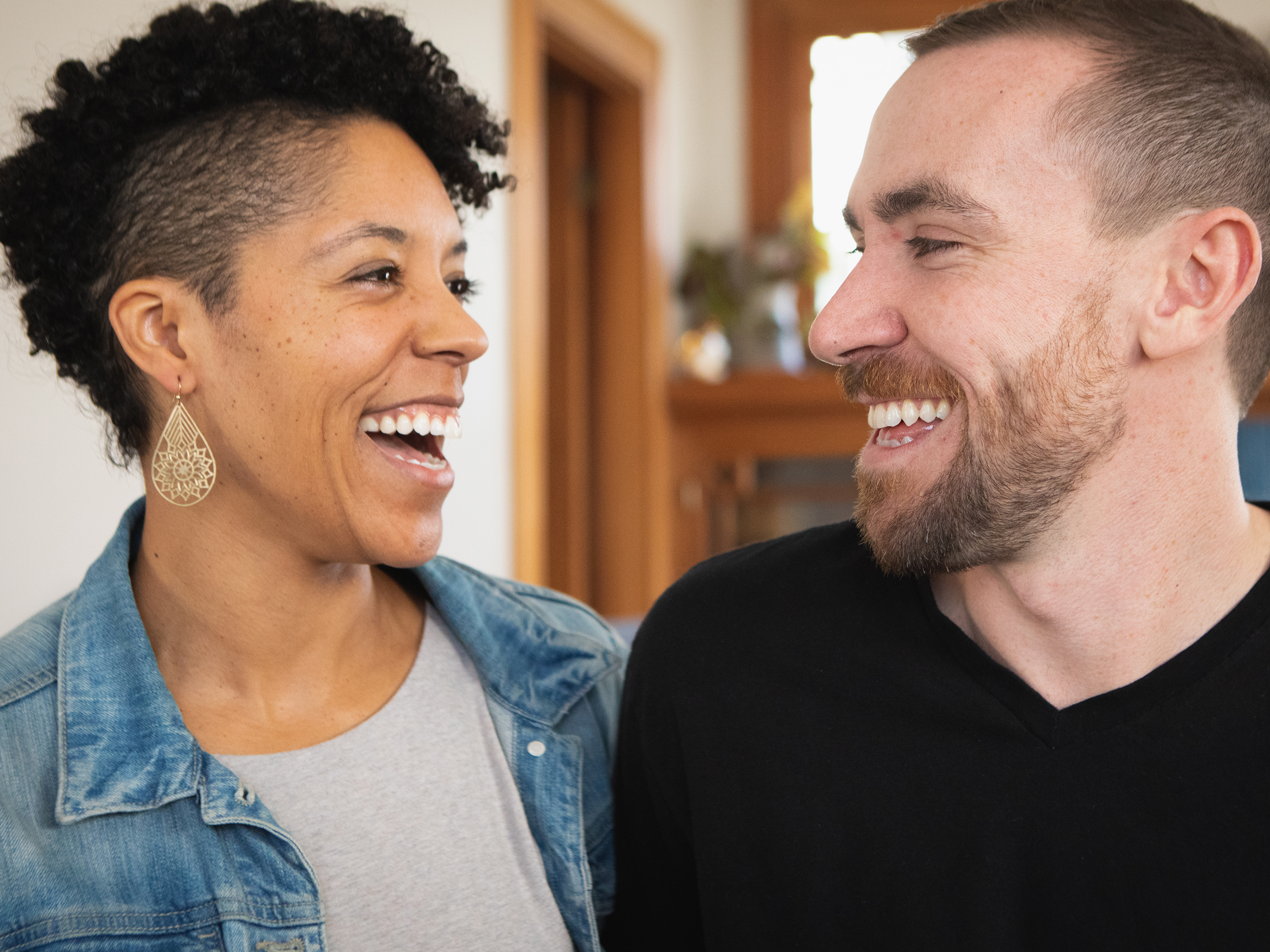 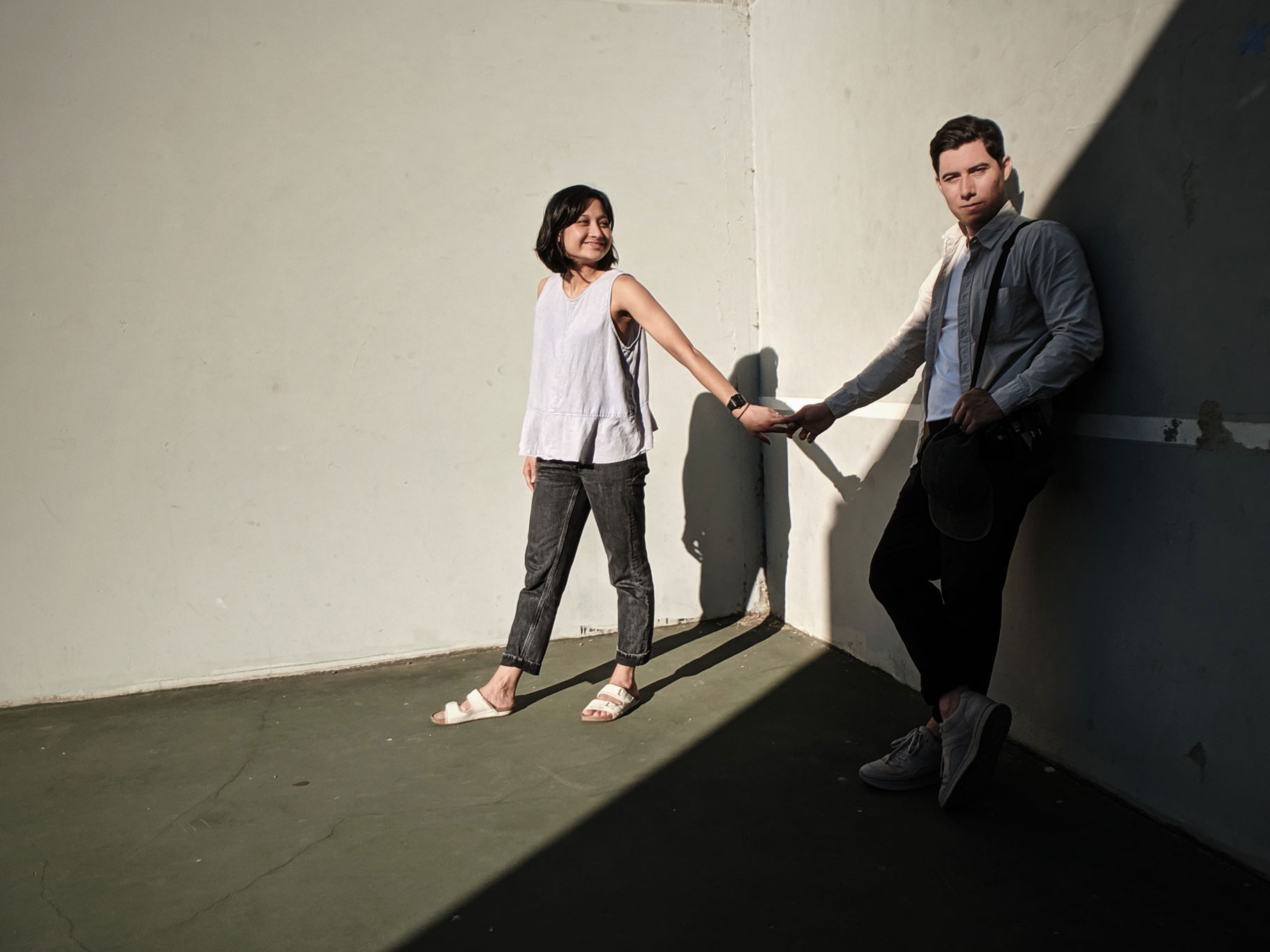 Technicolor is an online magazine celebrating multi-ethnic relationships through conversations and photos.

Created by Justin in California

Thanks to Bonsai partners﻿